Warmer weather signals the end of the snakes’ hibernation. They then come out of hiding in search of food or a mate, and more often than not, they end up in people’s houses or backyards.

In Queensland, most especially, since the weather is warm and occasional floods happen, snakes are generally more rampant compared to other areas. Perhaps, one of the reasons is that it is also home to a wider variety of deadly snakes, such as brown snakes, taipans, black snakes and tiger-type snakes.

Contrary to popular belief, snakes are not really aggressive by nature. As much as possible, they do not seek encounters with humans. However, they do have the tendency to retaliate when provoked. On the other hand, this does not mean anyone can just go and hunt them. In fact, NEVER ATTEMPT TO CATCH A SNAKE — most people who had been bitten by snakes are those who tried to hunt and kill them. 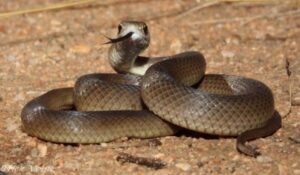 If a snake is reported to have been seen in or near your area, there are a few things you need to do to ensure safety:

Always be prepared in the event of a snake bite. Ensure you have an action plan ready to be carried out when necessary.

Should a snake bite occur, contact 000 for an ambulance, and have the patient taken to the emergency department immediately.